The Bullfight arena Las Arenas de Toros was build in 1900, but nowadays it is a huge shopping mall of 6 floors. The arena is located next to Placa Espanya, nearby the MNAC and the magic fountain.

The Arena was designed by the architect August Font i Carreras in 1900. The 52 meters of diameter arena has a capacity of 16,000 people. Many bulls and men have fought some bloody fights here. For over 75 year the arena was filled with people who watched and enjoyed the show of fighting man and bulls. Besides bullfights, the arena also hosted a few concerts(like the Beatles in 1966), rallies, boxing, the circus, and it was a military headquarter during the Spanish Civil War between 1936 and 1939. The last bullfight took place in June 1997 and the arena stood empty until architect Richard Rogers made plans for a commercial complex in 1999.

The shopping mall finally opened in 2011 and the project had a total cost of 70 million euros. It contains 104,576 meters square and 116 outlets spread over six floors, three dedicated to shopping space and three leisure space. You will find shops like Desigual, Mango, White, Sephora, Swarovski and Punt Roma. But there is also a cinema with 12 sales, a spa, restaurants, the Rock museum and a panoramic view on the rooftop. It is one of the largest domes in Europe, 27 meters high and 300 meters of circular route, from which will provide a 360 degree view of Barcelona.Las Arenas also offer more than 1,700 places for cars and even more for motorbikes with its four-storey car park. 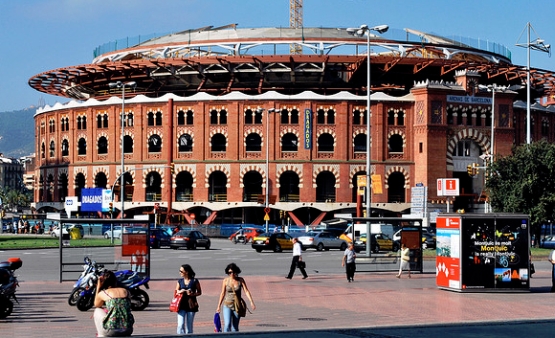