You are here: Home / FC Barcelona

FC Barcelona is THE football club in Barcelona. The club belongs to the European and world top.

History
FC Barcelona was founded at 29 November 1899 by the Swiss Johan Joan Gamper. The first year mainly Swiss and English soccer players played in the team. Around 1920 was the most successful period for Barça. Different prices where won in that period.
The arrival of Rinus Michels, Johan Cruijff and Johan Neeskens in the 70´s were a big success for FC Barcelona, with as highlight the landtitle in 1975. The 80´s were mixed, but when Johan Cruijff returned in 1988 as coach, the most successful period of the history began. Led by Cruijff, the famous dream team won 4 land titles and the Europacup I. The Englishman Bobby Robson and the third Dutch coach Louis van Gaal kept FC Barcelona successful.
After a downturn at the begin of the 21st century, it was in 2005 again a Dutch man, Frank Rijnaard, who led Barça to further success. This leaded the team to the land title and the Supercopa de España. Frank Rijnaard was replaced by Josep Guardiola after season 2006/07 and 2007/08 were bad seasons. Guardiola led the club to the national dubbel (land title and Copa del Rey) and the Champions League in 2009, later that year followed by the Supercopa, the UEFA Supercup and the world cup for club teams. 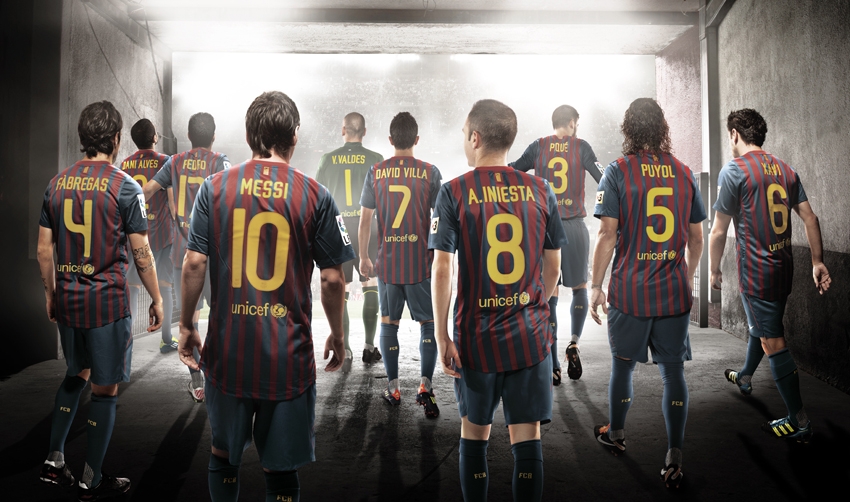 Logo
The clublogo of FC Barcelona, also called as escudo, has changed a lot these past years. But in 1913 FC Barcelona got their own logo. The logo contains the Olla, with 3 surfaces and a middle lane.
• The Olla was designed by Joan Gamper, founder of the club, referring as a eating pot of construction workers. This eating pot was the central point during lunch and stood for unity, fun and cosiness. Gamper thought FC Barcelona should fulfil a similar role within society. The points left and right on the logo are grips, the lowest point is fire underneath the eating pot and the waves on top is the boiling substance.
• The surface left on top is a red cross with a white background, the sign of Sant Jordi, the protector of Catalunya.
• The surface right on top shows the pattern of the senyera, the flag of the old kingdom Aragón and the old county Barcelona: 4 red bands with a yellow background.
• The lower surface shows the colours of FC Barcelona, blue and red, with a beige football in the middle referring the most important sport in the club.
• The middle lane shows the lettres ´FCB´, referring to the club´s name. The middle lane has made most of the changes over the years.

Camp nou
Camp Nou is the biggest stadium of Europe. The soccer temple can accommodate up to 98.787 people. When the renovation has ended in 2012, the home of FC Barcelona will be one of the three biggest stadiums of the world.
It is possible for outsiders to see Camp Nou inside and out through the tour. The audio guide system gives you a tour through Camp Nou and the museum in your own paste, so you don´t miss a thing(Catalan, Spanish, English, French, Italian, German and Dutch audio guide). 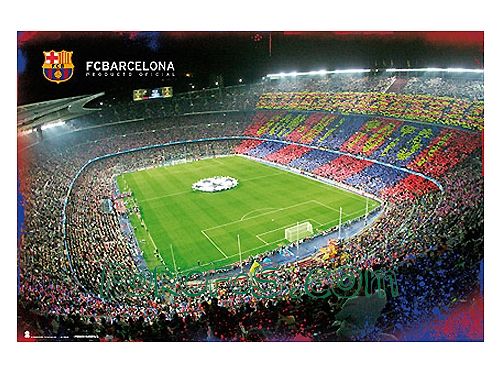 Posted in THINGS TO DO
← Previous Next →